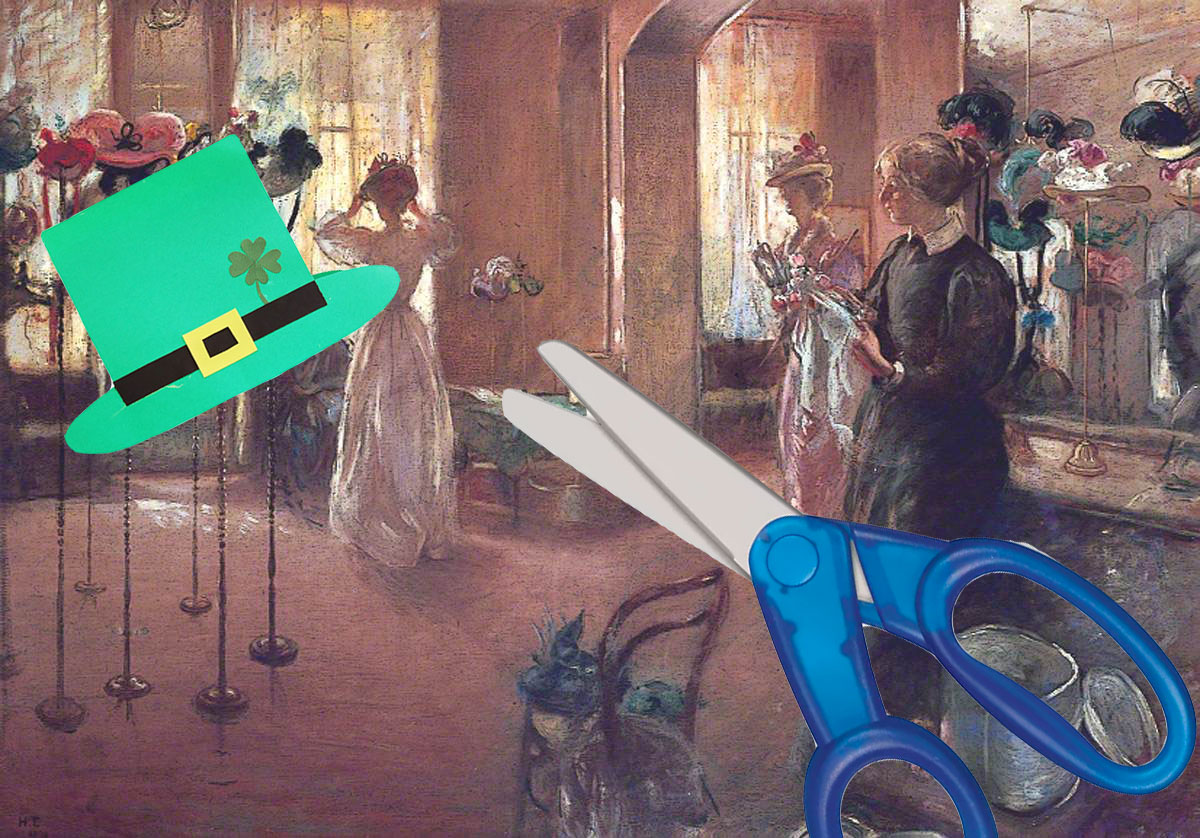 The word craft often looked upon with disdain in the millinery and broader community. But I think craft is unfairly banished to the realm of pink scissors, felt, and boggle eyes. No wonder when we so often see ‘kids craft projects’ splashed about the media. Many now see craft as what ‘unskilled’ mums sit down with their kids and do but has no place in the world of making fine hats. Apart from being stereotypical, that thinking couldn’t be further from the truth. Realistically, finger painting or making a pet rock is more art than craft. Undoubtedly, our society devalues crafts traditionally performed by women. Certainly lesser than art. Our perpetuation of these ideas only continues the stigma related to craft.

Art and craft are mixed up and used interchangeably to mean any number of things. Simplistically, craft is the skilled manufacture of useful objects, whereas art is the creation for expression’s sake. It’s no wonder they are often confused because they are linked, but they are different and deserve further investigation by critical thinkers.

In the physical sense, which is the scope of this piece, craft is straightforward to describe. One can’t craft without learning, practice, and dexterity. It directly pertains to skill and mastery. Think blacksmithing, knitting, woodcarving, couture, or building a house. They all require a degree of skill. Certainly not Clag and safety scissors. objects made by a craftsperson have an intrinsic value brought about by their usefulness. I’m disappointed the term has been watered down and misused so. I’m proud to be a craftsperson, but I catch myself in the act. When I see a headpiece made without much skill, I say, ‘that’s a bit crafty looking’. I have to stop. I hope you will too.

1) The use of the imagination to express ideas or feelings, particularly in painting, drawing or sculpture.

2) Examples of objects such as paintings, drawings or sculptures

3) The skill of creating objects such as paintings and drawings, especially when you study it.

What does that mean? It’s a pretty broad definition and fits many things we do. Indeed art is broad and encompasses a lot, but I believe there is more to it. Art is finished when the artist is finished expressing. The artist doesn’t begin with A and consciously head toward B. Art utilises craft disciplines to enhance its appeal and recognition, but it does not necessitate skill. On the contrary, skill is merely a vehicle for artistic expression. So does our pet rock require skill? Not really. Does it require imagination? Is it expressive? Most certainly.

Art and Craft in Millinery

Since art and craft are not mutually exclusive, I believe there is room for both in hat-making. I certainly need to learn and hone my skills to make a hat, so there is no doubt that it’s a craft. But what about art? Before writing this and thinking about it, I, like many, would have said that making a beautiful hat requires artistic expression. Though your hat may involve it, calling it art because of its beauty misrepresents both art and craft. Craft being functional does not exclude beauty, nor does art require it. My stunning hat may represent an expression of my feelings, but sometimes it’s nothing more than a testament to the mastery of my craft. The pleasing combination of shape and line requires skill. I think making attractive colour combinations is as much a skill as an expression of feeling.

Giving craft its dignity back

If you are like me and have shied away from using the word craft to describe what you do as a milliner, maybe it’s time to bring it back in line with what it means. Instead of describing a hat as crafty, I might say it lacks finesse or looks cheap. As craftspeople, I think we have our part to play in ensuring our work is recognised as requiring skill and expertise. We need to command the respect that traditionally men’s crafts do and bring our pricing, descriptions, and marketing in line. I should be crafting a hat, not merely making it. Honing my craft in a workshop.

So, by all means, call your millinery art. Only you can know if it is but don’t forget that millinery is a craft, and the more we take back the word and give it its total value, the better.

Want to learn more about the craft of millinery? Why not gain some new skills by taking part in a workshop or some online training?